Hatred makes people say and imagine lots of weird things. Don’t have a clue where “real estate homes” comes from. But hatred does make people sick. Give you that.

Pontifex Geronimo 13 said:
I spent half my life selling stuff that was in short supply and if I had given in to one customer and let them stockpile while everyone else suffered, that would soon be my only customer.
Click to expand...

Is this not a reference to your real estate career?

Pontifex Geronimo 13 said:
Hatred makes people say and imagine lots of weird things. Don’t have a clue where “real estate homes” comes from. But hatred does make people sick. Give you that.
Click to expand...

Yes, we see that in hatred of "lLiberals"

Pontifex Geronimo 13 said:
That’s what the governor of NY State did. You don’t hear about that, because he could still run for President as a Democrat.

if trump did that - wow, the left would explode. But Crickets.
Click to expand...

Northwind said:
Yes, we see that in hatred of "lLiberals"
Click to expand...

Northwind said:
He subsequently helped other states when their cases increased as NY no longer needed them.
Click to expand...

There have also been reports of unusually high death rates among patients on ventilators elsewhere in the US and in China and the UK, the AP said.

Redbaron said:
Maybe this guy? Anthony Atamanuik, who had a comedy-channel show for a bit in 2017 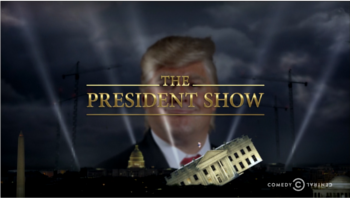 Thanks, I’ll have to check that out.

Waterfall said:
I don't think Trump is funny at all, he's dangerous and many in the USA are defending him no matter what he does. On top of that there are conspiracy theories abounding that are diluting peoples abilities to reason their way out of a paper bag.
In my mind he is a "gas lighter" a form of cognitive dissonance. Whether he is even aware that he is doing it or not, I don't know. A population can become a victim of this type of abuse. Victims can be persuaded that black is white by creating "reasonable doubt" a technique that is often used to sway juries and cause them to doubt their own perceptions of what's real. This is referred to as "the illusory truth effect", which is when falsehoods are repeated enough, they are internalized as true by the victim(s) simply due to the effect of repetition. We see this with Trump all the time when he says something totally insane then denies he even said it despite the fact there are numerous videos and witnesses to confirm that he said it. Continuous lies from the president and minimization of the truth convinces a victim they are imagining things or suffering from memory loss, rather than relying on what they actually hear, see, or even their own experience.....again due to the effects of repetition.
To me, even news reporters, whether they're from CNN or Fox have become victims too. No longer do they report the facts or the 5 W's and leave their opinions out of the loop but we are given every biased opinion as part of their reporting. Rarely are news reports on the same page when it comes to the news and it further creates the perfect storm for any abusive leader to manipulate the masses when he wants to claim only he holds the truth and everyone else's facts are fake. This should be a huge red flag for the American public or any country, but it's not. Trump is definitely a malignant narcissist IMO but we don't have to accept his twisted narratives and the only way anyone or a country as a whole can escape this perverse dialogue is to return to trusting their own reality.
Trump has succeeded in dividing the country and even the world and no I don't think he is or ever will be the only one who has ever done this. It's been done before and will be again. Some do this by being less flambouyant, well spoken and smooth. They appeal to the downtrodden, the poor, the forgotten who are convinced to believe this person is actually doing good on their behalf and appears to listen to them....vulnerable people are more receptive to anyone that promises to save them, but they have to adore and only listen to them in order for them to be saved. Isn't it amazing that so many "ordinary" people have been convinced to think they need a rich multi millionaire who is more than likely going to stroke his own cronies rather than even know one iota what it's like to be in their shoes? Wake up, wake up, wake up......we're all being played!
Click to expand...

Yes. I understand that the reality of his behaviour is not funny. It’s hard to believe it’s real, so maybe I find some weird humour in that dissonant space or else I’d probably just be sad or angry every time he opened his mouth (or tweeted). Finding a sense of humour while getting through the BS is helpful.

Gas lighting is deliberate mental/ emotional deception. By now I think (hope) there are far more people who notice it, than there are those who don’t.
Last edited: Jul 10, 2020

Ritafee said:
New York City officials have said at least 80% of coronavirus patients who were put on ventilators there ultimately died

There have also been reports of unusually high death rates among patients on ventilators elsewhere in the US and in China and the UK, the AP said.
Click to expand...

Remember that the NY outbreak happened at the beginning of the pandemic before that was known. In fact, that's probably known now because of that. Of course, that doesn't mean the deaths were good.

Northwind said:
@Pontifex Geronimo 13 how about you tell us one thing that the president actually did well in response to the pandemic.
Click to expand...

I don't think this is a good thing but you might ...

Trump gave billions more to Bill Gates' GAVI. than he ever did to the WHO.

The Bill and Melinda Gates Foundation and GAVI came in 2nd and 3rd for funding.

Now with the US out of the way 2 organizations funded by Gates are now #1 and #2.

In early June, the Trump admin announced they are partnering with GAVI and gave $1.16 BILLION to the organization.

That's billions not millions. This is way more than the US was giving to the WHO.

Waterfall said:
Is this not a reference to your real estate career?
Click to expand...

Blackbelt was in real estate. I’m Métis, I can shoot and fish without a license and my people will cover my legal fees.
L

Powerful blind lyres may be so energetic that the source may begin to believe what they spread without understanding ... thus strings hum at the plucking!

On aggressive Christianity vs its component of passive Christianity ... an aggressive persona that hates aggression against them; seems like a duality complex that leaves the medium in a state indicated by waste land. (carry the big stick softly or with the roar of that stick from down under?) It's aboriginal conflict ...

Trump commuted Roger Stone’s sentence. Mueller had a few words to say about that in a Washington Post opinion piece. I closed the page. I thought I had copied the link, sorry. It’s being reported several places anyway.

Yes Trump is a funny guy. Democrats know poor Biden would get chewed up if he was in the same room with Trump. So they are trying like mad to find legitimate sounding excuses to not have debates this year.

The Democrats media who only let people hear tiny clips of what Trump says and then spin it out of context would have a problem with keeping their story straight, if all Americans could tune in and hear what Trump actually says.

So Donald, knowing that right now Twitter is his only way of reaching people, and knowing the dems are planning on keeping him from being heard, calls up his buddy Kanye, and gets him to run for president as an independent. And Kanye says he will run his government the way the government is run in the Black Panther movie. So totally kooky, and is only going to draw votes from the LLeft.

So hitting Biden from both ends. So if Biden wants to sit out the presidential debates-fine with Trump, he and Kanye can have the debates without him and take turns playing pin the tail on the donkey.

Everyday PG ... you sound more and more like a control freak ... once known as ave'rd to a vow to beat up on everything!

Not that gentile provided image you project and poke out there ... imagine kind and humble Christians! Just out of your leagues ... consider it a reaction to your activity ... some science rule about all acts having reactions! One the power and energy is wasted ... it'll all settle down and listen to God in the silence!

Isn't that the pits for the dissonant type on the alternate side of that thin red line? May appear as a tye covering sensitive Ba'aLs! A security item?

Pontifex Geronimo 13 said:
The Democrats media who only let people hear tiny clips of what Trump says and then spin it out of context would have a problem with keeping their story straight, if all Americans could tune in and hear what Trump actually says.
Click to expand...

You make an assumption that people only get their news from one source. While that may be the case often, it isn't always true.

I believe the president is a very damaged man. I believe he is unfit for the office he holds. I've tried to see his redeeming qualities. I've even watched what Fox says about him. I've watched things where he is speaking for longer periods. The notorious covid briefings as one example. I did not see how any "context" would make his behaviour reasonable.

This man has been well known for decades. I will admit that I have never been impressed. I don't have any respect for greedy, narcissistic braggarts who treat women like toys to be used.

I fail to see how he is suitable for his position or even remotely admirable.

Pontifex Geronimo 13 said:
The Democrats media who only let people hear tiny clips of what Trump says and then spin it out of context
Click to expand...