Luce NDs said:
Can you imagine a buggy eye'd monstrosity ...
Click to expand...

Hell, with all the B movies I watched in my misspent youth, I can easily imagine a few bug-eyed monstrosities.

I am on the fence about Jojo Rabbit.

On the one hand, it's a new film from Taika Waititi, one of the funniest writer/director/actor multi-threats in the industry right now. His vampire mockumentary What We Do in the Shadows had me and I've heard great things about his take on Thor in Thor : Ragnarok.

On the other hand, comedies about Nazis and the Holocaust just have so much potential to be cringe-inducing.

The plot is about a German boy involved in the Hitler youth who has Hitler (Waititi) as his imaginary friend and what happens when he discovers that his mother (Scarlett Johanssen) is hiding a Jewish girl in their attic. So perhaps more a dramedy than a full-on comedy. 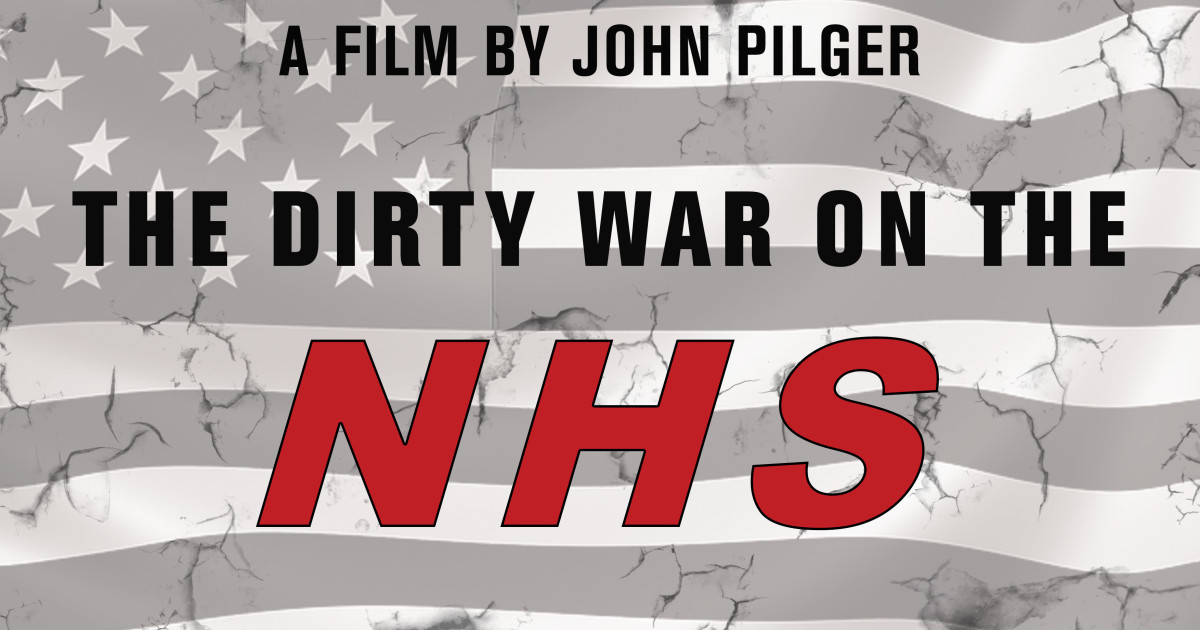 The Dirty War on the NHS - a film by John Pilger

Support John Pilger's urgent new film | Check out 'The Dirty War on the NHS - a film by John Pilger' on Indiegogo.

“We have this confusion in our mind between admiration for the person who tells the truth, and a slight fear of them. And I don’t know why that is. Because we need people to tell the truth, or we’ll all end up in an authoritarian dictatorship. So I think she’s a wonderful example of an ordinary person doing something extraordinary.” The Most Consequential Whistleblower Who Wasn't

While so many have heard of whistleblowers Chelsea Manning and Edward Snowden making history in recent years, few have heard the story of Katharine Gun, th

There are no official secrets ... as this couldn.t be accepted as outright truth by powers steered towards bullish politics!

As possible resource for fertility?

On the one hand, War of the Worlds has been filmed so many times, I'm not sure we need another one.

So I have mixed feelings about this upcoming BBC production.

From the producers of Fractured Land, comes a short film based on the legend of Simon Gunanoot.

Meanwhile, in Hazelton, grubstaker Seamus Campbell and his shotgun-toting thug come to the Two Mile Saloon to collect a debt from failed prospector Danny Kelly.

In desperation, Kelly impulsively decides to head deep into the frozen wilds of the Skeena Mountains in pursuit of Gunanoot and the $1,000 bounty on his head.

Kelly soon realizes he’s in over his head – the hunter becomes the hunted. In the ensuing dogsled chase, Simon’s curious actions leave viewers wondering who he was, and just how far Canadian society has evolved since his time. Evolution does not occur in a conservative nation in which little changes ... even for the sake of learning ...

It's a TV show, not a movie, but apparently Netflix has signed a deal for an animated TV series based on the fantasy comic book series Bone by Jeff Smith. I read it along with Little M years ago and it is fantastic. Basically, a trio of cartoon/comic strip characters enter a hidden valley and end up in a fantasy epic.

Most likely what we'll get will be him funding a vanity project to puff his image after he's out of office (regardless of how he ends up leaving office).
L

Will there be institutions called Trump Enclosures?

Stuff like that should be Kahn 'd ... boggien in the dark? In parts of Canada we even have swamp donkeys! Moose in neigh homes ... a good place to retreat to muse ...
J

Have I mentioned?... Since coming to Korea, I've discovered the wonder that is the 4DX movie format. Now, I only go to see films that get released in 4DX. A bonus - I now have a movie complex right across the street. Nine regular cinemas plus a 4DX cinema plus an Arthouse cinema.

So who the hell decided to have Cats come out against the final Star Wars main series movie, Rise of Skywalker? I mean, it might work as counter-programming, but they'll probably take a serious beating at the box office.
L

Mendalla said:
So who the hell decided to have Cats come out against the final Star Wars main series movie, Rise of Skywalker? I mean, it might work as counter-programming, but they'll probably take a serious beating at the box office.
Click to expand...

Cats do follow in the wake --- Finnegan said! They watch everything from farcide well screened from the main event!

And the new trailer is up. Meowwwww.

Mendalla said:
So who the hell decided to have Cats come out against the final Star Wars main series movie, Rise of Skywalker? I mean, it might work as counter-programming, but they'll probably take a serious beating at the box office.
Click to expand...

You're right, I think. There are only a few people (me included) who would prefer seeing Cats over ROS.

Jae said:
You're right, I think. There are only a few people (me included) who would prefer seeing Cats over ROS.
Click to expand...

And there are some (c'est moi) who would like to see both. That said, I start a family vacation on that day anyhow so I will probably end up waiting for them to hit DVD or streaming as usual.
J

Mendalla said:
And there are some (c'est moi) who would like to see both. That said, I start a family vacation on that day anyhow so I will probably end up waiting for them to hit DVD or streaming as usual.
Click to expand...

I won't see ROS because I gave up on SW after seeing TPM. I will go see Cats if it opens here in 4DX.

Mendalla said:
I am on the fence about Jojo Rabbit.
Click to expand...

I went and saw it last night with my son.

There are a good many laughs. There are also some deeply moving moments.

The context makes it difficult to connect initially. As the film unwinds you see the trauma of being a 10 year old in the Hitler Youth during the fall of the Reich.

Jojo is so infatuated with serving in Hitler's private guard he imagines Hitler to be his best friend. Giving us a very different impression of Hitler through the eyes of a 10 year old worshipper.

As Jojo becomes increasingly conflicted his imaginary Hitler begins to gradually resemble the Hitler we are most familiar with.

Jojo's mom is turn by turn revealed to be with the Resistance. She is hiding a young Jewish woman in the family home keeping the secret from Jojo who is dedicated to becoming a good Nazi.

She loves Jojo and still believes that buried under the naziism is the lovely boy she loves. She doesn't live to see her belief confirmed. Which leads to one of the hardest blows the film delivers. Jojo discovering his mother hung in the public square as a traitor.

There is the young Jewish woman, Elsa, that through twists and turns goes from terrifying Jojo to winning his heart. The budding young nazi finds humanity in the monstrous Jew. The young fugitive Jew finds a charming little boy in the monsterous nazi.

It is a turbulent relationship to be sure which survives a visit from the Gestapo who search the house ( no doubt as a result of having already captured, interrogated and executed Jojo's mother). Elsa is discovered as she attempts to pass herself off as Jojo's older sister (missing and presumed dead).

Papers are asked for and collected by Captain Klenze (Jojo's Commander). He asks Elsa her age and date of birth then hands her papers back proclaiming everything is in order. The Gestapo leave. Elsa acknowledges that she got the date of birth wrong. Klenze covered for her.

Klenze is an interesting character. Injured at the front he is reassigned as Kommandant of the local Hitler Youth Brigade. Where he is quite candid that Germany is about to lose the war. He clearly is not enamoured of German leadership and does not openly resist Naziism though he is quite content to undermine it through studious indifference.

Klenze clearly notes thare is a difference between being a good person and a good nazi. His final act is one of goodness to save Jojo who doesn't comprehend until machine guns open up and he realizes German soldiers, Klenze among them, have just been executed.

One final scene with Hitler after Jojo becomes aware of Hitler's suicide has Hitler offer Jojo a swastika saying that if he puts it on they can be together forever. Which is likely true. If Jojo puts that armband on and steps outside