Another article of interest, especially in the events of the past week, from James McGrath. 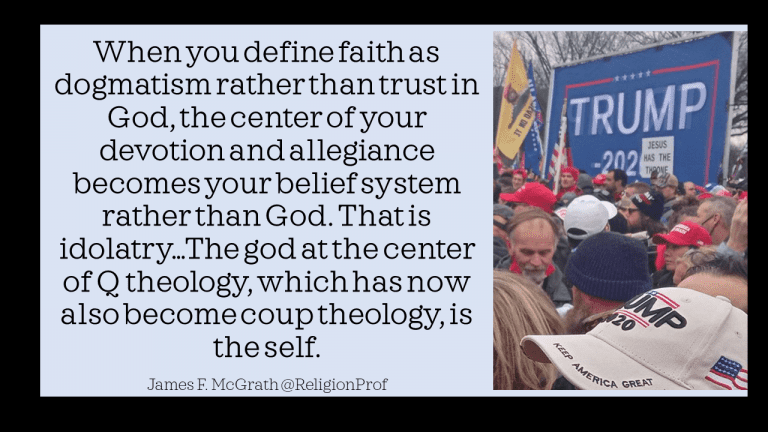 There is a theological root among the others that give birth to and feed the embrace of conspiracy theories in the United States, leading to the rioting

When you define faith as dogmatism rather than trust in God, the center of your devotion and allegiance becomes your belief system rather than God. That is idolatry.
Click to expand...

I like this passage. A lot. It reflects on some other conversations happening here, too.
L

Is dogmatism like bureaucratic protocol that won't change regardless of what's seen as experience?

Then if the experience observed is denied and excluded ... a gap in the system ... like indigeneity ... separation of statistics from desire!

May be a crack in the headman ... due to fall from the horse!

Would one have to be blind to something or other?

At the center ... attractive gravitas ... the great haul force ... when observing the point ... repulsive to many as something to be learned about nothing but the point made! Circular logic so you can turn and see the hind effect ... it follows! A great many follow nothing just to avoid something else that they might have to learn about! Knowledge is shunned in some Christianity ... as a raugh (raw?) learning curve insecurity about being alone ... given the agoraphobia?

This is when you know your cooked like the frog in warm water slowly progressing ... as something other than expected ...

Is the purpose of life to introduce irrationality to people that just don't believe such naivete systems can exist in a system as systemic flaw in fixation? Deb elle cracks ...
L

Q as queue is another line to Quelle ... as the Book of Kells goes ... unbelievable story on the back of the image!

May cause the vessel to Keel over ... bottoms up as an incognita? The reverse of cognate as related ... irrelevant to many oligarchs!

Did you know that attaman was an old healing faith that stated that if you didn't have something in your head ... you wouldn;t sense that you were sick of something that was previously unknown to you ... and thus a mass didn't wish to know and it was taken lightly ... attaman was said to be a derivation of Ma'at ... an Egyptian icon ... you can be addaman'd about that!

Knowledge about archaic painful words to know? What about that ... when it sinks into the Eire sphere ... fuzzy rounds as you cannot legitimately identify it as a common person due to grammar laws! Laws and loss ... everywhere you look ... and unavailable loops for the vernacular folks!
Last edited: Sunday at 6:54 AM

I found the article affirming. This quote speaks to me:

“They replace humble recognition of human limitation with unshakeable confidence that they, their assumptions and opinions, are right, and must be affirmed no matter what evidence to the contrary is presented.”

We have this position posted by some some in our Cafe community. These regularly affirm that I will go to hell if I do not conform to their doctrine or dogma.
L

Oh the illustrations that could be cited ... not incited!

GeoFee said:
These regularly affirm that I will go to hell if I do not conform to their doctrine or dogma.
Click to expand...

Not just you. The particular person we're discussing doesn't approve of a single minister who posts here.

GeoFee -----you quoted -----We have this position posted by some some in our Cafe community. These regularly affirm that I will go to hell if I do not conform to their doctrine or dogma.

Greek word for death here in this scripture -----

1) the death of the body

1b) with the implied idea of future misery in hell

1c) the nether world, the abode of the dead, was conceived as being very dark, it is equivalent to the region of thickest darkness, i.e. a region enveloped in the darkness of ignorance and sin

death comprises all the miseries arising from sin, as well physical death as the loss of a life consecrated to God and blessed in him on earth -- to be followed by wretchedness in the lower world used in (Romans 6:23;


GeoFee -----you said ----“They replace humble recognition of human limitation with unshakeable confidence that they, their assumptions and opinions, are right, and must be affirmed no matter what evidence to the contrary is presented.”

8 But even if we, or an angel from heaven, should preach to you a gospel contrary to that which we [originally] preached to you, let him be condemned to destruction! 9 As we have said before, so I now say again, if anyone is preaching to you a gospel different from that which you received [from us], let him be condemned to destruction!

There's an old proverb that says, if you tell someone the sun is 93,000,000 miles away they'll believe you. If you tell someone the paint on a park bench os wet, they have to find out for themselves. It seems for some, rather than to admit their beloved candidate lost an election by 7 million popular votes, and 70 EC votes, they'll cling to any right-wingnut source of disinformation that says there were errors in counting, 346 affidavits, 300,000 vote dumps, etc etc rather than believe the reality. 'Truth hath not the same right as error.'

Redbaron said:
'Truth hath not the same right as error.'
Click to expand...

Errors do not cease to be errors simply because they’re ratified into law.

Ritafee said:
Errors do not cease to be errors simply because they’re ratified into law.
Click to expand...