Just wandering & wondering today.
Are you somebody who regularly listens to podcasts?
What are some favourites you might recommend & why?

There's a CBC program called "Podcast Playlist" which I often enjoy. They cover a huge range of interesting topics.

It's great for those who are interested in macrame. Lots of interesting information and great tips.
L

Yes, I've heard that too - such a variety of interesting tidbits! Yesterday I was looking at the NPR site - listened to a couple of podcasts on how to make yourself like exercising - not working for me so far!! LOL

I have mentioned it before, but Homebrewed Christianity, produced and hosted by Tripp Fuller, is one I enjoy from time to time. Fuller recently completed his doctorate at process hotbed Claremont School of Theology so it skews that way. For instance, Fuller is friends with Thomas Oord, whose latest book we are discussing in a study group thread and Oord recently made an appearance to discuss that book.

I have been listening a lot to The Liturgists. It's a spirituality and life podcast moreso than a Christian or theological one. It was started by Michael Gungor, a musician and author who was originally an evangelical Christian but is now focussed on Eastern spirituality (Hinduism, in particular), and "Science Mike" McHargue, raised a Baptist but who became an atheist before discovering a more progressive faith through science and a mystical experience. To that core pair, they have added Vancouver-based therapist and speaker Hillary McBride and Christian musician and activist William Matthews. The focus is not on theology or Biblical studies. In fact, they rarely drop scripture passages or directly discuss theological problems and questions. It's more about living and how religious/spiritual thought and practice fits into our lives regardless of faith tradition or lack thereof. Which, I find, makes them of more interest to me right now than Homebrewed's rather academic focus on theology. The style is meditative and gentle, another positive, often with soft music filtering in behind readings or longer comments in the discussion (hey, two of them are musician so it fits). Since pretty much all of them have gone through changes in their faith to some degree, there's a lot of focus on supporting people in transition and seekers. Faith is not assumed. In fact, it's probably more useful to someone like me who's a bit a sea in their faith but still appreciates a spiritual side to life than it would be to a committed Christian (or other committed faith).

Two I listen to

Harry Potter and the Sacred text. Sounds odd I know interesting to listen to

Lastpointe said:
Harry Potter and the Sacred text. Sounds odd I know interesting to listen to
Click to expand...

I eyeballed that one a few times but I've never actually read or watched HP all the way through, just picked up bits and pieces when Little M read the series.

My new podcast discovery is David Tennant Does a Podcast With. Basically it is 50-60 minute conversations between the Scottish actor (who has appeared in Doctor Who, Good Omens, Broadchurch, Jessica Jones, and more) and various celebrities, many with personal or professional connections to David. I discovered it through author Neil Gaiman when he was the guest a couple weeks ago and listened to that episode on my walk today. A really good conversation mostly focussed on writing and Gaiman's literary career. As for Gaiman's connection to Tennant, he was the writer and showrunner on Good Omens as well as co-author of the novel on which it is based.

The Gaiman episode of Spotify: Neil Gaiman - David Tennant Does a Podcast With…

The podcasts' page on Spotify: David Tennant Does a Podcast With… - Somethin' Else & No Mystery

Unlike some podcasts, this one doesn't seem to be downloadable from the artist's website, only from podcast apps/sites like Spotify, Google Podcasts, etc.

Another new favorite is Geek's Guide to the Galaxy. It covers a fairly broad range of topics under the general banner of s-f and fantasy media. Sometimes it's an interview with an author or other creative, others it is panels reviewing a group of media on a particular theme, still others are book or movie discussion groups. Host is an s-f writer himself, David Barr Kirtley (though I think he is actually best know for his podcasting) and the panels often consist of authors and other involved in the field. 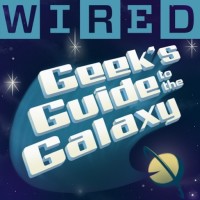 A talk show about science fiction, fantasy, and geekery of all kinds

I never got into podcasts much. The one I do listen to now is Marc Maron's "WTF" podcast. It's been on for 11 years and is really popular... that's how out of touch with podcasts I am. It was so popular he had Obama show up to tape an episode in Marc's garage, while Obama was still president. (It actually wasn't so simple to arrange - I recommend starting with that podcast episode if you listen to it, though.) It's hilarious listening to Marc freak the F out before Obama comes in. And it's real. Maron is real - a bit abrasive, a tad crude, a lot funny, and a sensitive, caring soul.

He's been company through parts of this crazy year - he talks like he's talking to friends - tells his audience about all his woes big and small. And he, with few exceptions, draws the "real" out of celebs who show up in their public armour.
Last edited: Oct 25, 2020

The Majority Report is both a podcast and a YouTube show. I've never just listened to it (unless I happen to not be looking at the screen). Not sure how good it would be to just have audio because they rely on video clips a lot. If they don't carefully explain what they and the viewers are looking at (and I'm not sure if they do), it would be hard to follow.

Here's one I just found and am trying to work up the nerve to watch it. Timely and creepy.

ninj said:
Here's one I just found and am trying to work up the nerve to watch it. Timely and creepy.

It's good. I listened to a few episodes at one point. They even have a TV series now at Amazon Prime.

I have more than a few favourites that I am no longer allowed to 'freely' listen to or view - almost all have been censored for violating one official narrative rule or another. So nothing to recommend that will be easily found by those less interested in hearing more than MSM sanctioned or ruling technocratic socially engineered propaganda than I am ... that is not to dismiss the podcasts or recommendations that will be posted here ... I am open to all points of view and willing to make up my own mind based on what resonates and what does not.
Last edited: Oct 25, 2020
You must log in or register to reply here.
Share:
Facebook Twitter Reddit Pinterest Tumblr WhatsApp Email Share Link
Top