And China has joined the USA on Mars. Zhurong, China's Mars rover, touched down not long ago in Utopia Planetia.

Well apparently there is just enough air on Mars (though not much) to allow us to hear sound:

And here's the sounds that have been recorded by Nasa on Mars including the wind: 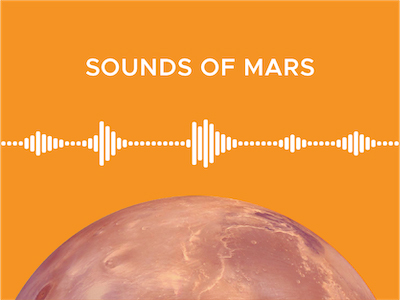 Waterfall said:
Well apparently there is just enough air on Mars (though not much) to allow us to hear sound:

And here's the sounds that have been recorded by Nasa on Mars including the wind:

It also captured the sound of the Ingenuity drone copter on one of its flights. This has been a real highlight of the mission, I think. We have never really heard what it sounds like on another world before.

Re: space garbage ~ a piece of debris (too small to be tracked) has hit the Canadarm2 (part of International Space Station) puncturing the thermal blanket and damaging the boom.

Interesting new research that suggests Mars is not as geologically dead as we sometimes portray it to be. The evidence is a combination of studies showing that there could have been recent (as in, 50,000 years ago) eruptions and seismic activity detected by the InSight lander. Previously known volcanoes on Mars, such as the massive Olympus Mons, date to a much earlier period of the planet's history and up until now, scientists have generally accepted the hypothesis that geological activity on the Red Planet ceased millions or even billions of years ago. That in turn reduces the likelihood of life since volcanoes play an important role in developing a planet's ecosphere, as known from our understanding of the processes on our own planet. This new evidence that geological activity may still be going on, or happened more recently than earlier known, raises the stakes in the search for life on the planet.

With more more landers and rovers on the surface than ever before, hopefully more evidence may turn up to help figure this out, but it suggests our longstanding idea of Mars as a geologically dead planet may be in for some revisions. 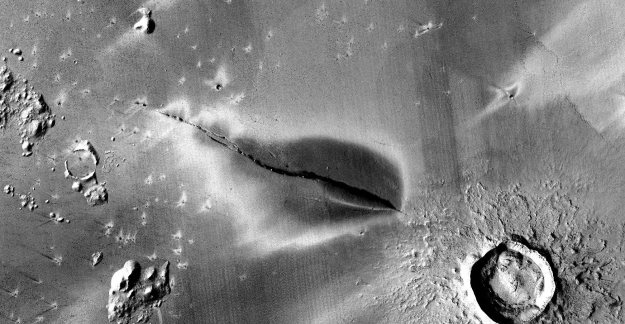 Volcanoes on Mars Could be Active, Raising Possibility that Planet was Recently Habitable

The most recent volcanic activity on Mars, which occurred about 50,000 years ago, might have been triggered by a nearby asteroid impact that happened around the same time.

Imagine how many more beliefs could be prone to fallacy ... given all that we don't know by exemption!

It is said that 3000 ancient wise men were crucified in the Roman Alps ... murder in Apennine Way ... to dispose of aboriginal cognizance about natural beginnings needing nurture ... as it is difficult to get anima to process as it is a special work ... spatial Job opening up such thought process ... across a vast void domain ... the vale of Daffydus ... a beautiful Welsh expression of the wonder of the dark jouster, good knight gurl?

The Romans blamed this on the Vandals and Celts ... Hadrian was baffled and contained ... myth of Dannan erupted! It is a lengthy story of filmy grasp ... like the emperor in the rye ... with Cycle? Stuff going as hubris and nemesis ... ups and downs of hated civilization fearing society!

Humans are really alien as having a potential beyond anima ... if appropriately coed as Mahjong ... by chance of how the tiles are laid ...!

The brute chose indoctrination and whitewashing of those right out of it ... I claim to know nothing ... as a near virtue! The powers claim opposing perspectives ... allows for red shifts and blue stars!

There may be more tuit that mortals can accumulate in one pass ...

You will note that I have refrained from discussing the whole billionaires in space thing. I plan to keep it that way. Doesn't deserve discussion.

On to some real space news. Russia has been working for years on a new module, called Nauka, for their wing of the ISS. It finally got launched and has been no end of trouble ever since. Took eight days from launch to docking due to various problems. Today, it actually messed up the attitude (tilt) of the entire space station when its thrusters misfired just before the Russians on the ISS finally got to open the thing's hatch. What a mess. 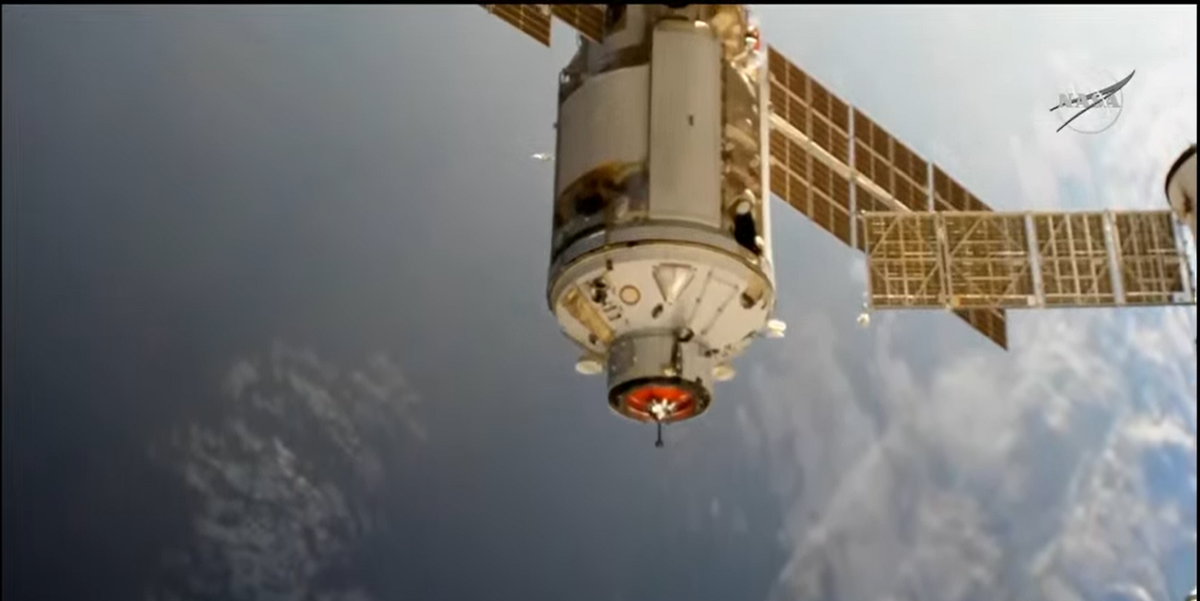 Nauka continues to provide lots of drama in orbit.

Pirate fan since the dark ages

Nah, the billionaires' rides weren't worth noting. Little popgun rides, in space for seconds or minutes, rather than hours or days. Alan Shepherd did that much 60 years ago. (and Yuri Gagarin did considerably more). And neither Gagarin's nor Shepherd's craft resembled giant phallic symbols.
L

Thus phallus Ci in that discussion ... dick of a subject!
L

We have done a fair bit of work studying the interior of the Earth through research into things like seismology. But we have never had more than theoretical knowledge of the interiors of other planets. Until now.

This morning, Lucy launched into space. No, not another billionaire or washed-up sci-fi star, but a serious science mission to Jupiter's Trojan asteroids as well as one in the asteroid belt. As usual, Scott Manley has a good story on it.


And he also did one on Lagrange points, which are important to understanding Trojan asteroids and this mission (and some other space missions as well).

The name Lucy is taken from the famous Australopithecus skeleton found in Ethiopia in 1974 and named after the Beatles' "Lucy in the Sky with Diamonds". The idea is that the Jovian Trojans could contain "fossils" of the early formation of the Solar System, much as Lucy provided insight into the early evolution of hominins.
L

The name Lucy is taken from the famous Australopithecus skeleton found in Ethiopia in 1974 and named after the Beatles' "Lucy in the Sky with Diamonds". The idea is that the Jovian Trojans could contain "fossils" of the early formation of the Solar System, much as Lucy provided insight into the early evolution of hominins.
Click to expand...

And nothing is less lucid than Lucy that is stated to have existed in time unaccounted for biblically ... recall what contains those religious types ... enlightened and ju'Cid ... well wined? Speak of addictions to knowing not ... thus naught came to be ... out of a touch spot ... means to the Scottie path!

And the usual combination of Chinese aversity to publicity and Western ignorance means the other big space story of today is getting ignored. The core module of China's new space station (the station is called Tiangong, the module Tianhe) was launched earlier this year and is now inhabited for the second time. A three person crew, including two veteran taikonauts (Chinese name for astronauts), boarded the station from the Shenzhou 13 spacecraft this morning for a six month stay. Given that the ISS is nearing end of life and there is no sign of any agreement between the US and Russia to maintain it past that, Tiangong could well be the only inhabited orbital platform before the end of this decade.

A three slide story on the mission from China Daily:

And a more detailed story from South China Morning Post: 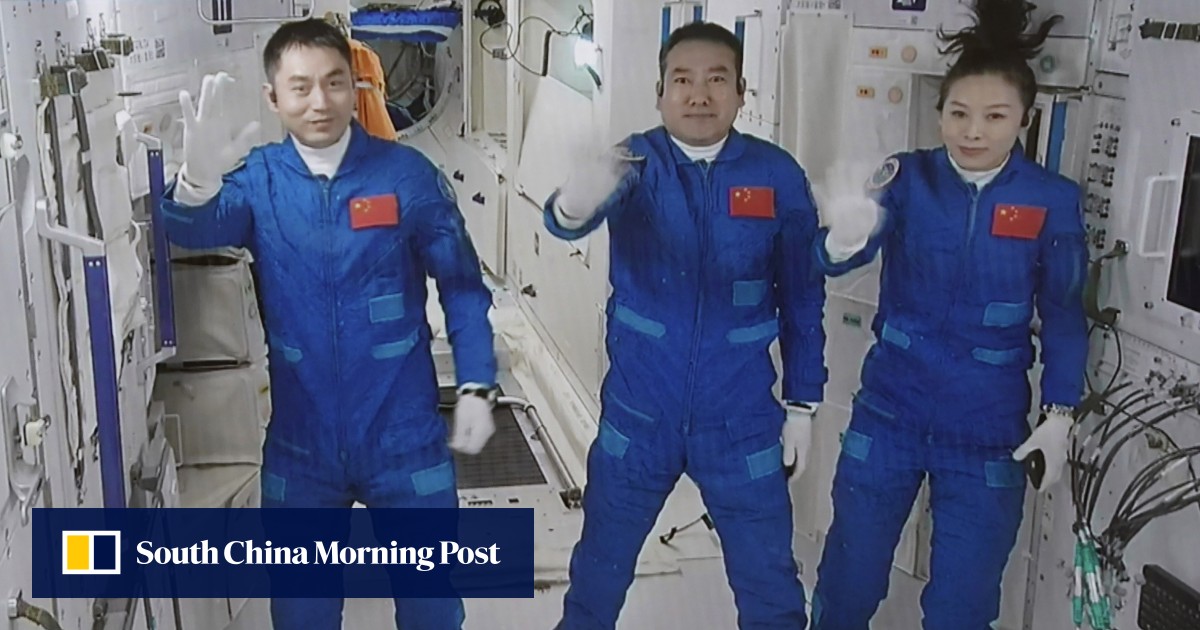 Length of mission to be one of the biggest challenges for the two men and one woman on board.

After this, the Chinese will be adding two lab modules and there are plans for the next two crews (Shenzhou 14 and 15) to cohabit for a while, giving them 6 persons on board, the largest crew ever for a Chinese space mission.

Among the taikonauts on this mission is Wang Yaping, who was the second Chinese woman in space back in 2013 and is now going to be the first Chinese woman to do an EVA, a.k.a. a "spacewalk". The commander of Shenzhou 13, Zhai Zhigang, was the first Chinese taikonaut to carry out a spacewalk in 2008 so I imagine he will be joining her. Apparently one of the tasks for this mission's EVAs is to install a Chinese counterpart to the ISS's Canadarm.
L

Is a taikonaught like a talk'n odd and thus a silent projection for private means? many nod of when looking up at nothing ... profoundly bored down ... to near nothing?

Okay, so one Westerner has taken notice of Shenzhou 13. But Chris Hadfield is a bit of an exceptional case given that he is a retired astronaut himself and continues to have an interest in space travel and exploration (his first novel is a thriller about a fictitious 18th Apollo mission).

This is what happens when a former NASA guy becomes a cartoonist.

There's been a lot said and written about the risk of an asteroid impact on the Earth. Well, some folks at NASA are doing more than talking and writing. There's a mission happening that will test our ability to redirect an asteroid. The non-avian dinosaurs and other lifeforms that bit the dust at the end in the K-T boundary event basically never had a chance. Given our capabilities, we may have that chance.

Mendalla said:
There's been a lot said and written about the risk of an asteroid impact on the Earth. Well, some folks at NASA are doing more than talking and writing. There's a mission happening that will test our ability to redirect an asteroid. The non-avian dinosaurs and other lifeforms that bit the dust at the end in the K-T boundary event basically never had a chance. Given our capabilities, we may have that chance.