Mendalla said:
It ain't our war.
Click to expand...

You're sort of joking, right? "Their" (U.S.) war is always "our" war, in some horrific fashion.

BetteTheRed said:
You're sort of joking, right? "Their" (U.S.) war is always "our" war, in some horrific fashion.
Click to expand...

In fact, the only US colonial war we have directly participated in during my lifetime was Afghanistan (arguably Syria, though we really didn't do much in the ISIS campaign) and since that got NATO backing, it was kind of hard for us to say no, though we could have applied caveats as the Europeans did to keep us out of the worst combat zones.

I'm getting very strange reports from some news sources. They report US and Iranian ships shooting at each there. Many of them reflect an air of hysteria. But the more reliable sources have published nothing like this.

Trump has now adopted a more aggressive stance. He has, very foolishly, allowed Bolton to put him on the side of the hawks. And that's the danger. most of the world is opposed to the U.S. in this- even most of those European countries that have supported the U.S. in the past. All he has is Israel, Saudi Arabia and the emirates. Trump may well decide he needs more allies. And here's Canada, the biggest country in the American empire....

We'll play a farce we've played before. We'll be be peacekeepers/ And alas, we've been patsies for this before.. Afghanistan, Syria, Korea, Libya, Cuba, Haiti--plus our troops on the Russian border.
L

Are farces like political things lying there in plain sight and virtually unseen essences of destruction? Perhaps farces are improper tense and this just a far Ci call!

Words can fly and so can chits ... thus essential missals ... they can grow into reality ... and separate us from understanding the darker abstract ... the unconscious portion that may resemble PTSD when we discover we wished we hadn't done that!

He's on the brink of war with at least four countries - Iran, Venezuela, China, and Cuba.. and he's letting John Bolton lead him around. This is very dangerous.
L

Graeme Decarie said:
He's on the brink of war with at least four countries - Iran, Venezuela, China, and Cuba.. and he's letting John Bolton lead him around. This is very dangerous.
Click to expand...

It appears to me to be similar to the danger of politics and unbounded love of business to beat the other ... satisfied minds are rare and ethereal ... some say crazy ... leaving me to wonder about sane people! Is crazy something about the divine nature of insanity in negative and positive ways?

Newton stated to all actions there are reactions ... except in the blindness of hart in the dark syndrome ... condition of soliloquy; coyotes, wolves, whippoorwills and killdeer ... histrionics? Something to die for ... knowledge beyond the norm? Thus that lone ranger ... blanched out ... like a slowly boiled f(rogue) ... unorthodox members of the prescient protocol? That which was before us ... wry time ... sort of warped --- Einstein Jaerd it! Still part of the pickled state ... it is where we're at ... kosher herring ... fish in a desert place ... arid humours ... yom kippur! Time of the fish ... Aquarius ...
Last edited: May 22, 2019
L

There may be something deeper in the bones of myth ... yet how would we know when dwelling on blind passions?

Can you see it yet?

I know the Iran scene has been getting quiet. Don't kid yourself. Trump is goint to try to make Iran accept very difficult conditions. But that's not the worst part.

Israel and SAudi Arabia want this war - very, very much. And it is still very, very likely to happen - with others drawn in. This is a war suicidal for everybody.

Saddest to watch is how Israel has become the destroyer of Judaism. And this goes back to the 1940s when Jews were slaughtered - and the rest of the world (like Canada) didn't give a damn. knew what Hitler was doing, and we didn't care. Israelis knew, as well, that they were given Israel so so they wouln't come here. I had a number of Jewish friends from that period. They were no fools They knew why they were given a Jewish state. And that made them a duplicate of the naziis in their treatement of Palestinians.. And Netanyahu is every inch a nazi.
L

Sounds to complex, Graeme, for those that would like it darker and more mysterious (simple buss) and thus not retained as good sense!

Such desires must be entertained in a world that staunchly denies entertainment of sectarian nature ... too non essential as spiritual gestalt! Blotchy memes ... do tel naught! They didn't wish to know in the larger major part!

Trump has sent 1500 more troops to those already around Iran. In other words, an Iran war, started by Bolton, is just about a sure thing. And that is going to create tremendous violence and suffering throughout the whole region.

Disturbance creates great men ... or is that another reciprocal turn about so as to confuse the troops! Next another imaginary wall goes up ... like that around a house on a hill ... once known as a Zion by mountain folk ... then azides are a mental extraction for the alchemii that makes great explosives! Powers safety bags in autos ... that blast in crash incident ... life goes on with a bang ... then there are big ban Gooks ...

The Iran issue may be taking an ominous turn.
Trump is not downplaying it as an issue at all. He speaks of coming to a peaceful settlement with Iran. And that may well be his way of putting the skids on John Bolton's war dreams.
However,, attention is shifting to China. The Pentagon and others give every sign of wanting a war with China a)because it is already a powerful state - and b) perhaps the most powerful after the U.S. - and because it's power is still expanding.

A land war is probably out of the question. The Chinese army is way too big for a United States that lost Koria and Vietnam and, soon, Afghanistan. As well,the U.S. has shown a marked preference for aerial bombing Added to that, the U.S. is almost certainly better situated for nuclear bombing than China is.
L

The Opium Wars all over again ... a strong indication that someone in high places is stoned ... or stoned and high enough to fall into secular insanity!

Some deny humanity's insanity is possible ... thus dreams of naivete ... or ignorant dreams as whetted! Maybe the whett will be dried out by the blast ... and we start a;; over again ... coming around after the Shabbat-I'am? Shabby time!
L

The world could be hor'd and frosty after the quick initial flash bang ... natural cycles as innate? Thus the destructive factions are gone and only the essence of what was learned remains ... essence of mind as a shadowy ghost of the former (hoer frost)?

Sometime appears as needles rising from the wet dirt ... the Earth weeps ...

Japan is trying to play diplomat in this mess. 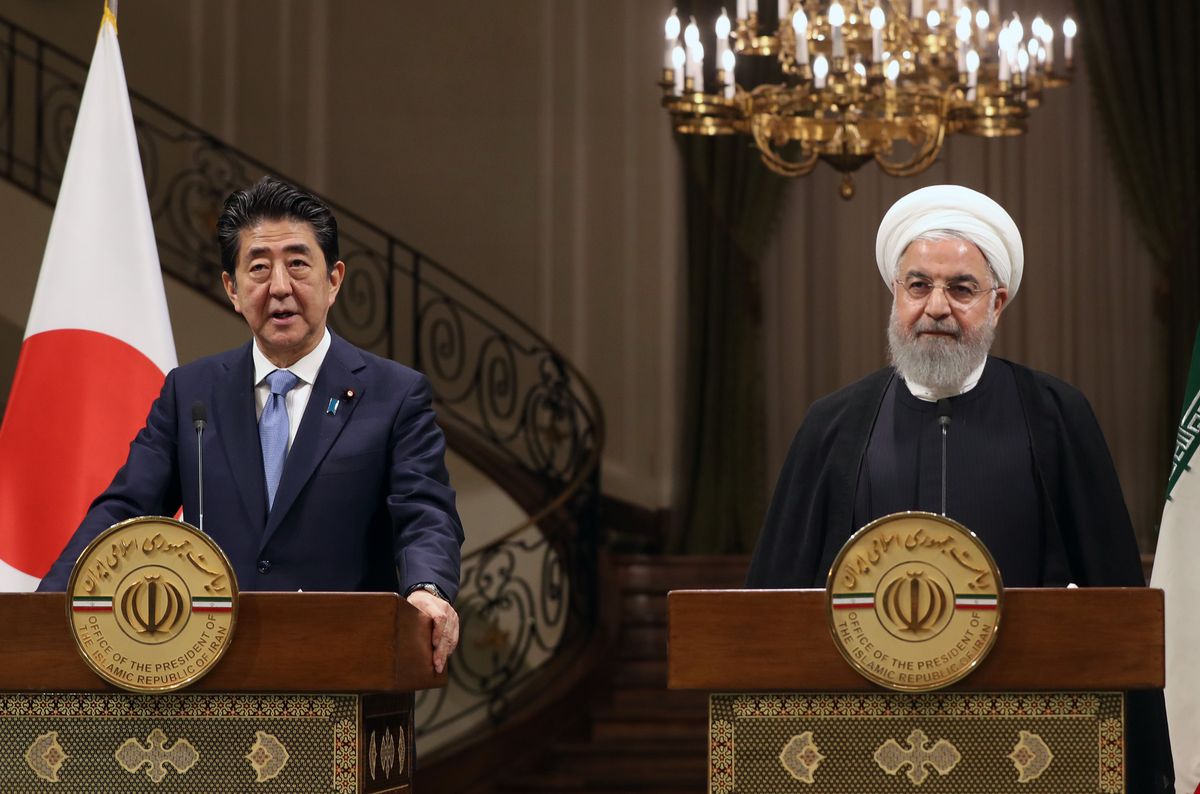 Japan’s Abe warns an ‘accidental conflict’ could be sparked amid tensions between Iran, U.S. 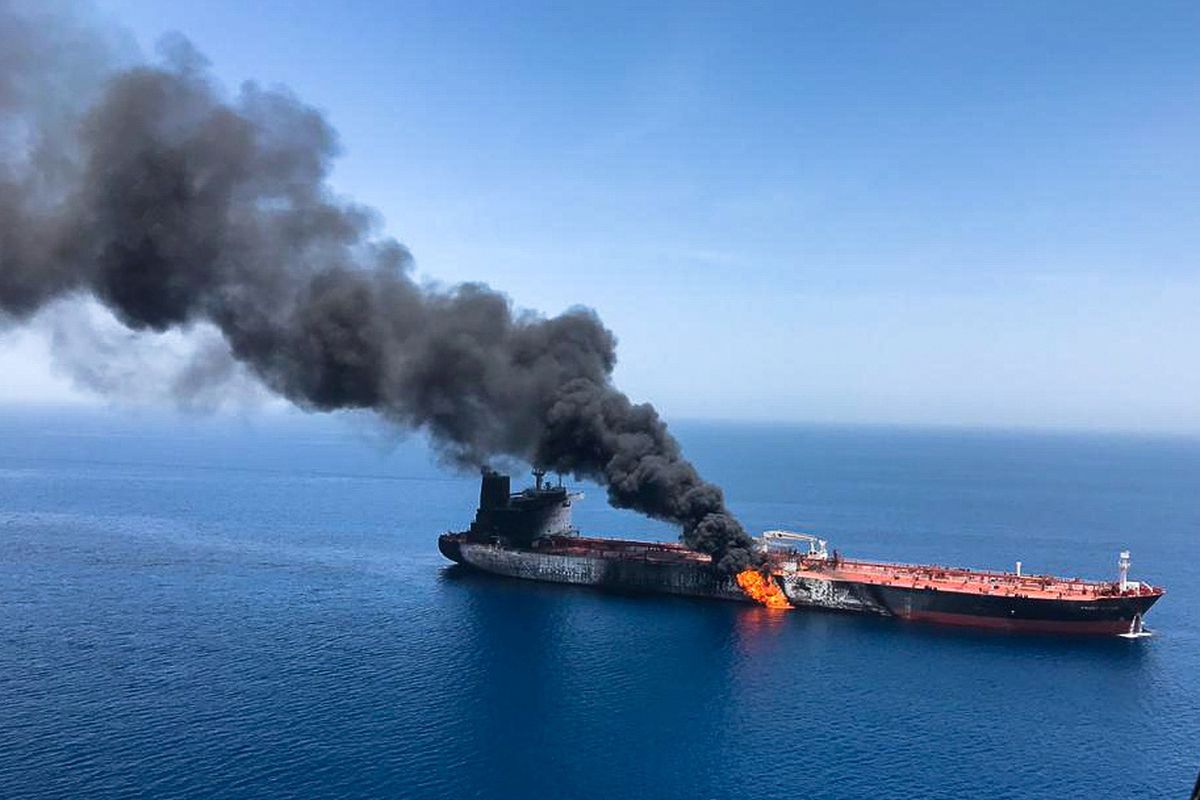 "Doubt is the key to the door of knowledge; it is the servant of discovery "

Do you doubt that someone is trying to close this doorway for the rest of the world for an occidental benefit? There would be no sacred agendas like that ... rite!

Once again many could be in Eire about their BS! Floating fecundity ...

Notice how this attack was so similar to the earlier one when 4 ships were attacked? What all of those attacks had in common is that they did not sink or evev seriously damage the ships. odd. conicidence? I doubt it.

Trump has announced this was done by Iran. Let's see, now. Nobody saw the attack itself -- just like the earlier case. And why would any country launch such feeble attacks in this situation. They certatinly weren't going to get any thank for it.

Now, the owner of the Japanese tanker said the attack did NOT come from Iran. Obviously he knows something.

And Britain has supported Trump. Of course. The days of imperial glory are over. Britain has to kiss Trump's rear end. What scares me is that Canada is an American lackey, too. And it may well fall in with the Trump parade. We are, after all, a piece of the American empire.

If Iran wanted to sink those ships, they'd be sunk, or at least badly damaged. Not mildly inconvenienced. And how would Iran benefit from sinking a Japanese tanker, especially with Abe visiting? It doesn't make any sense.

Where are the "false flag" conspiracy theorists now? I want to know.

@blackbelt1961 you get the email chains. What is being said about this? 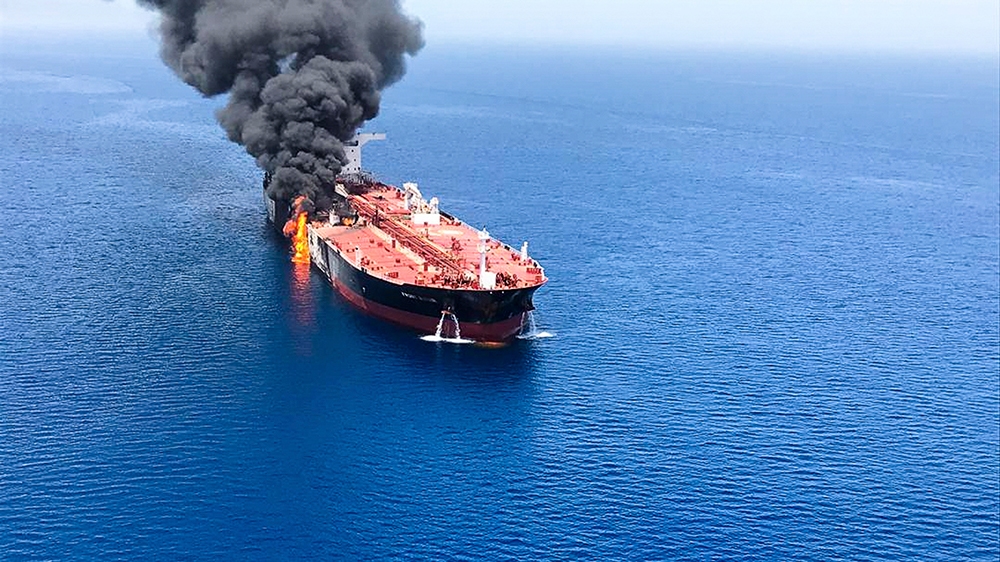 And There It Is...US Blames Iran For Tanker Attacks, Says Tehran "Trying To Interrupt Flow Of Oil" | The Iranian

Update 7: Ahead of comments to the UN Security Council (which will presumably block any action, with China and Russia backing Iran), unnamed officials are sharing with reporters some of what the US intends to say: U.S. OFFICIALS ALLEGE IRANIAN ATTACK MEANT TO ESCALATE CONFLICT OFFICIALS: ATTACK...