Keep an eye on this one. It could be very, very dangerous.

1. When military action is taken, it is normally (virtually always) announced by the head of state. This wasn't. It was announced by John Bolton with Trump quite absent.
2. John Bolton is mentally ill - and an extremely dangerous man. Some have said he is insane, and I wouldn't deny it. And there is every probability that he is in charge of the Iran affair.
3. The light, explosive charges had almost no effect on the tankers in a SAudi anchorage. This makes no sense. Who would launch such a useless attack? Iran? Give us a break. Iran would gain nothing whatever from such an attack. But John Bolton immediately laid down the charge that the attacks were by Iran. And he cannot possibly have known that in the time he had. No. It's far, far more likely this was set up by the U.S.
4. China has a big stake in Iran oil. And Russia almost certainly cannot allow the U.S. to have a free run over Iran.
5. The U.S. has a long and bloody history interfference and murder in Iran. between the war, Britain bled Iran. It set up a dictators - and Iran, for almost sixty years had to supply free oil to the whole British navy. Then, about 1948, Iran managed to set up a democratic government.
The UK promptly interfered, and called on the U.S; for help. Together they overthrew the elected government and installed a dictatorship again.
Then the US edged the British out and took over for itself. But the Iranians again overthrew the dictator, and elected a government. Ever since, the U.S. has been pushing for a war on Iran.

This is a very dangerous situation. And the leading American in it is a highly unstable American politician with a long history of aggression and murder.

Would you mind linking to a news story so we actually know what you're talking about?This is all news to me. 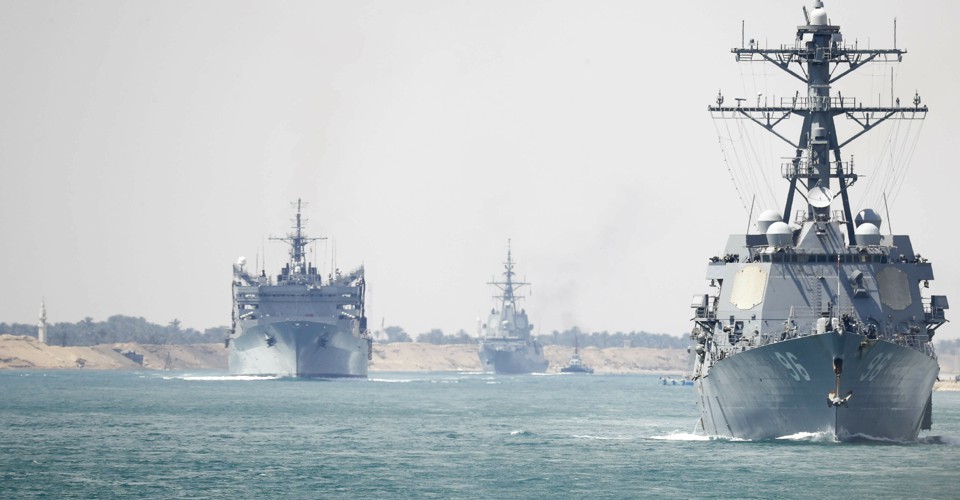 The Knowns and Unknowns of What’s Happening With Iran

Conflicting signals from both sides could be read as a march to war or business as usual.

Venezuela, North Korea, or Iran: Which One Is Next? - Antiwar.com Blog

When it comes to the next war that the United States engages in, it appears that the government is experiencing a bit of flip flop syndrome. It is like a child who cannot decide what it wants. "Mommy, I don’t want war with North Korea anymore. I want to go into Iran…I mean Venezuela…no, North …...

Does this liturgy smell of chaos ... and a child's' scents of temper tantrum and crapping all over themselves ...

Business as usual is bullying in the PEW! If you read into the NU's is it like writing on the great Wahl by an unseen Yan ... Plate Onus! The dwarfs are not supposed to see what's on top of the present plate of affairs ... that's Nanus, Nana or Nanos accrued stuff ... poorly understood in general staffing ... this may resemble a watery condition or the swamp that the executive watch pardoned! Pardon me my small visions through the flaws and riff't ... tis insane ... rite! Something to go through in the testing ...

In orthodoxy if something appears a bit crazy ... conform to it ... it may be an abortion meant to be maintained as something unwanted ... those that started it made a mistake and the alternate power wants nothing to do with it either as a mission of power ... corruption is the gaol ...

I'D prefer backing off ... in opposition of stepping deeper into it ... thus relief toones? Sing me a Sad Song ... its just the way it is in reality!

Absolutely there has to be an abstract ... yet somewhat dark and mysterious as myths upon war strategies ... the incidents are played out here and now! You cannot do anything but get out ... with a long dark cord connecting you to the unconscious acts! --- Lenard Cohen on Wanting it Darker? Sue's that EU ... a rebus?
Last edited: May 16, 2019

YOu're not going to get any help from any news story I've seen. Much of understanding current events has to come from thought. For example - the absence of Trump at the announcement of the Iran adventure is largely ignored by our press But that's key to understanding it. Similarly, to suggest that the attack on ships in a SAudi port is absurd. The idea that such an attack made any sense in crippling a enemy is nonsense.. Those charges made no sense as military acts. The damage was minimal. So from there, you need to think who gains by those explosives. So far, the western press blames Iran for the attacks.. But it has no evidence whatever - so how can it assign that blame?

Now we learn that Trump wasn't even told that Bolton and Pompeo had ordered warshiips to Iran. - though, again, the press has been very light on this. In short, Bolton and Pompeo have betrayed their president and their leadership. That tells us this is very dangerous - but our news media have not seen this.

What has happened is a betrayal of the president by members of his cabinet. People get hanged for that. But there's nothing in the news to indicate that happened.

Similarly, we knew nothing about the Nazi death camps until the war ended. But, in fact, western leaders knew about them from the start. We could have saved many thousands of Jews. we didn't because western leaders were almost as anti-semitic as Naziis were. Indeed, we turned back one thousands of Jews who had escaped from Europe. And we sent them back to die. We also long delayed accepting Jews even after the war. But none of this showed in our press.

This may be the greatest danger we have ever seen. two cabinet ministers, both with records of a reckless desire for war, have ignored the president and created a war situation which could plunge the whole middle east (and Russia and China and us) into a war that could well go nuclear. And the president knew nothing about it.

Why was this done? To please American oil companies and, on the side, Israel, Saudi Arabia, and the emirates.
graeme
L

Semite is a word symbol for a sign ... an icon that may institute thought ... in the emotional ring ... alien information is rejected! Strange as flying saucers containing common John's head as hedonistically martyred ... easily offered up in bliss!

That's ignorance or the easier doings of autonomous comments of Lord Acton on creeping corruption ... some cultivation is various schools may function better than outstanding in vacant fields of expertise that call lead to bulls and canons on men Ba'aL'n on top of boxes they can't escape because of the steps down required ... here we may be cemented in concrete Shues of houses of governing ... and knowing nothing of what's going on out there! Thus de Barred concepts of NU's ...

Carries a weird stigma .. like holes in the hand where values weep ...

There's nothing in our news about this? Here's the CBC story just out. If your computer won't open this, go to the CBC site/
L

Saw that earlier ... something else to deny to avoid contemplation of the complex implications ... thus more to be KISS doff! Especially if the apocalyptic nature bother your sense of piece ... isolationism!

To Mendalla - I would not take The Atlantic as a good source. For example, it repeatedly refers to this as a Tump move. In fact, Trump didn't even know about it. The announcement was made without telling him. that- all by itself - is very, very dangerous. Trump has supported it since - but not very energetically.

And it certainly looks as though Israel, Saudi Arabia and the emirates were fully infolved - without mentioning it to Trump. I have never even heard of such a thing. And Trump, who should have jailed Bolton and Pompeo, hs done nothing.

Graeme Decarie said:
To Mendalla - I would not take The Atlantic as a good source.
Click to expand...

I wasn't, I was just looking for a story that might fit with what you were rambling about so I could confirm I was thinking of the right story.

Rambling? Perhaps. That's often the only way you can get the truth about the news.

But, and at worst, certainly facts stand out.

1. Trump was not informed of what Bolton and Pompeo had done. This is almost unheard of - to moved toward a war without telling the
national leader,
2. The story about Iran trying to blow up ships in a Saudi port is absurd. Such small charges would have no significant effect at all. Nor has their been the slightest evidence to support such a charge.
3. Israel, SAudi and the emirates have been pushing for this for some time. They want Iran destroyed - and they want then to occupy it.
4. American oil companies have, for some time, made it clear that they want the Iran oil fields.
5. The U.S, since 1945, has been world's biggest aggressor with at least seventy attacks on countries, and uncounted attacks by special ops. It ias killed well over twenty million people in that time. Russia has attacked nobody. China's only war was in response to the U.S. war in Korea.

I"m sorry (and puzzled) that you should find that rambling. 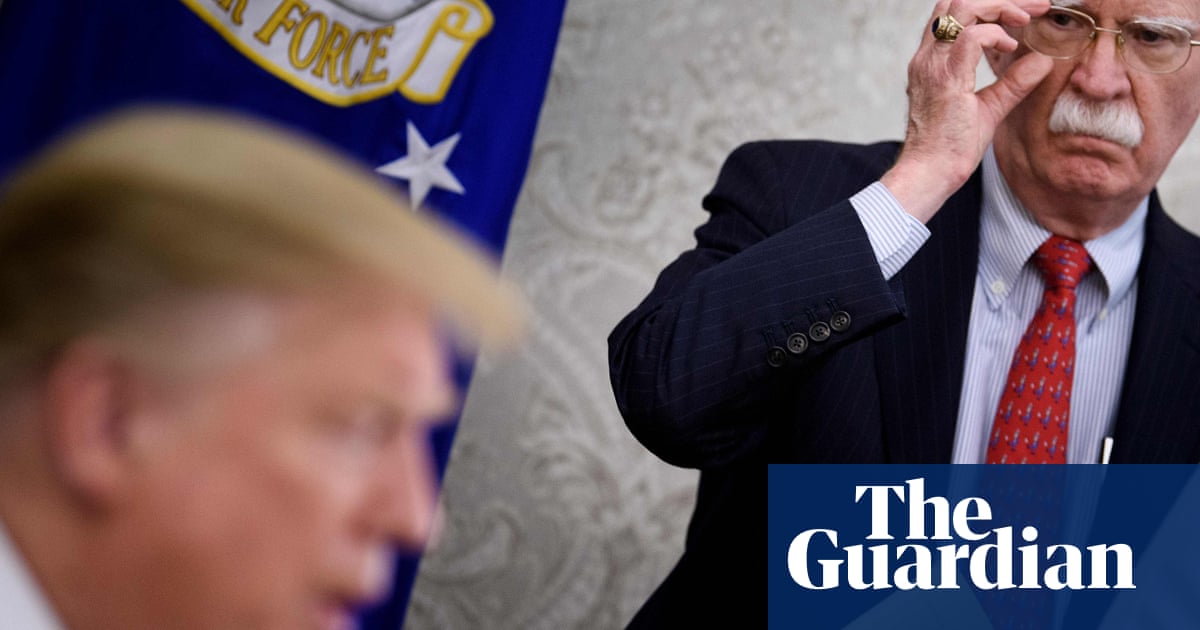 John Bolton: the man driving the US towards war … any war

Donald Trump’s national security adviser is stoking tensions with North Korea, Iran and Venezuela, in line with decades of taking the most hawkish position on any given issue

If you are still a doubter, then at least doubt because of a credible paper. The Guardian, with occasional lapses, is still the best conventional newspaper in the English language.

Oh, of course. There's also The Decarie Report. But make sure you get the current one - May 16.

(There are two Decarie Reports. One is very old - but still appears, for no good reason.

I agree with your perception of the heightened level of danger Graeme. I'm not a historian for sure, but it does disturb me greatly to see the radicalization in the US, the anti-abortion activity, this middle east issue, continued stuff with China, numerous Trump 'threats of more trade sanctions ... it all sounds very ominous to me.

It's rather what we expected, isn't it? That doesn't make it right or better, but it was clear from the start that Trump was a classic American bully on world affairs and would throw his country's weight around on the world stage. And that other right-wingers would take courage from his confrontational, no-compromises attitude, e.g. the states pushing a hardline on abortion.

There may be worse to come. American attitudes of today are very similar to the German attitudes that Hitler played on.

To Mendalla - agreed. But the danger here is that this fire is being lit not by Trump (though he'll go along on it). It's being lit by Bolton who's even more dangerous than Trump.

Graeme Decarie said:
To Mendalla - agreed. But the danger here is that this fire is being lit not by Trump (though he'll go along on it). It's being lit by Bolton who's even more dangerous than Trump.
Click to expand...

And who is where he is because Trump appointed him. Ditto the other right-wing nutbars in the administration. Electing Trump is what opened the door, even if he isn't directly responsible for all of it. I just hope the Americans figure that out before next November.
You must log in or register to reply here.
Share:
Facebook Twitter Reddit Pinterest Tumblr WhatsApp Email Link
Top